Book launch of Territories – Rural-urban Strategies as part of the “Hochschuldialog Südeuropa” (University Dialog Southern Europe) promoted by DAAD, as a cooperation between the Chair for Regional Building and Urban Planning at Leibniz Universität Hannover and the Department of Architecture at the University of Palermo. With talks by Jörg Schröder and Maddalena Ferretti

Territories – Rural-urban Strategies studies the dynamics of larger rural-urban spaces from a design perspective. Perception and concepts involving the overlaying of the urban and the rural require new impulses, in order to be able to discuss visions of a spatial future. Contrary to outdated dystopian concepts of urban and rural, Territories is targeted towards rural-urban interfaces—in terms of space, function, and significance. How can implicit knowledge be used systematically for these new perspectives and how can knowledge be gained by design? How can this approach contribute to relating development strategies to places and spaces in a new way, with regard both to public awareness and to increasingly separate specialist policies?
Territories – Rural-urban Strategies introduces innovative design and research perspectives of urbanism, landscape and architecture from Italy, Spain, and Germany in view of this discussion, with contributions e. g. from Manuel Gausa, Mosè Ricci, and Carles Llop.

Book launch of Territories – Rural-urban Strategies as part of the “Hochschuldialog Südeuropa” (University Dialog Southern Europe) promoted by DAAD, as a cooperation between the Chair for Regional Building and Urban Planning at Leibniz Universität Hannover and the Department of Architecture at the University of Palermo. Talks by Jörg Schröder and Maddalena Ferretti

Christoph Gielen, an artist who lives and works in New York, is known for breathtaking photographs taken from extreme heights. They show American cities in their geometric perfection and highways as a meandering network. But these photographs are more than beautiful images. They are formal studies of our appropriation of space and the impact of an excessive urge toward expansion upon our living spaces. Since the beginning of the year, parts of the series Ciphers have been on permanent loan at the ikob; they are being exhibited in Belgium for the first time.

Christoph Gielen is known for breathtaking photographs taken from extreme heights. They show American cities in their geometric perfection and highways as a meandering network. Since the beginning of the year, parts of the series Ciphers have been on permanent loan at the ikob; they are being exhibited in Belgium for the first time.

50 years ago in 1966, Eckhard Gerber began his career as a freelance architect in Meschede, Germany. Forming the basis of his new business, which he named “Werkgemeinschaft 66,” was a series of successful competition entries that he had worked on as a student. During the many years of success that followed, the firm, which has been based in Dortmund since 1979, has grown steadily. Today, Gerber Architekten has some 170 employees and further offices in Hamburg, Berlin, Riyadh, and Shanghai.
On the occasion of the 50th anniversary of Gerber Architekten, this exhibition offers insight into the various strategies and approaches used by the firm to realize its express goal to create places that touch people’s hearts and awaken their desires. With the help of drawings, models, photos, renderings, books, and films, select building projects will be presented in the context of their respective zeitgeist and constantly new architectural challenges, addressing a wide range of themes surrounding urban development as well as functional, cultural, and artistic issues. Additional key parameters impacting each project are the site’s specific characteristics, its history, topography, and surrounding structures, the climate and connectivity, as well as energy and ecological needs – aspects of particular importance today. At the heart of the design process is always the connection of architecture with the landscape and/or urban space. This has been achieved by embedding the building within the surrounding environment, by allowing the latter to flow into the building, or by establishing relational perspectives between them.
Featured projects include: the Göttingen State and University Library (1993), the Harenberg City Center in Dortmund (1994), the new Trade Fair Center in Karlsruhe (2003), the Biological Institute of the Technical University in Dresden (2005), the RWE Tower in Dortmund (2005), the U Tower – Center for Art and Creativity in Dortmund (2010), the King Fahad National Library in Riyadh (2013), the head-end structures of Quarter of Nations in Wilhelmsburg, Hamburg (2014), the Justus Liebig University in Giessen (2016), the Qur’an Museum in Al Madinah al Munawarah and the Haram Intermodal Metro Station in Riyadh (Saudi Arabia), as well as the HEHE Holdings office building in Taiyuan (China), which are currently in planning.

On the occasion of the 50th anniversary of Gerber Architekten, this exhibition offers insight into the various strategies and approaches used by the firm. Exhibition opening on December 9th at 6:30 pm.

Can collective urban practices contribute to peace processes in divided cities? How can they be used in a targeted manner as part of urban policy, to challenge dominant divisive narratives and offer alternatives to segregating urban reconstruction approaches? The book is dedicated to this role of architecture and urban planning as a political instrument for transforming ethnic conflicts into urban controversies towards the city’s commons. The town of Famagusta in Cyprus serves as an example, a town characterized by polarizing narratives and burdened by memories loaded with conflict. In order to transform the contested territories into areas of common interest and action, the “Hands-on Famagusta“ project team developed methods for urban transformation. The guide brings together practical examples of this project and international articles from relevant literature, thereby communicating strategies and tactics for the formation and spatial organization of the collective. It actively encourages deeply contested societies to invest in common urban imaginaries.

Drinks reception and presentation and discussion with Socrates Stratis, Peter Bishop and John Palmesino to celebrate the launch of the new publication Guide to Common Urban Imaginaries in Contested Spaces.

A weekend with scenographic and performative elements as well as reflections on cultural history, through which the historical past is connected with contemporary perspectives.

The Bauhaus Building Dessau is turning 90. At the birthday weekend a new foundation is being laid for the Bauhaus Museum Dessau.

The public event at the Institute for Sustainable Urbanism (ISU), TU Braunschweig, will be dedicated to the exploration of the potentials and challenges of the urbanization processes in cities of Africa. We understand URBAN AFRICA! as a commitment to a better city for all. So what can be done to stem this process? What is necessary to reach the Sustainable Development Goals (SDGs) of the United Nati- ons such as “Make cities and human settlements inclusive, safe, resilient and sustainable” in relation to the context of urbanization in Africa? And how could we meet the cultural, climatic and religious characteristics with respect to each of the countries?

The event is open to the public (registration requested). Take a look at the conference invitation here.

The fourth annual ISU Talks series is a public one-day conference and will be dedicated to the theme of “Urban Africa”.

In 2016 Topotek1 celebrates it’s 20th anniversary. On this occasion the monography Creative Infidelities. On Landscape Architecture of Topotek 1 was published by jovis Verlag accompanied by an exhibition held in the office of Topotek 1 in Berlin. Starting in November, this exhibition will be shown in the Architekturgalerie in Munich with selected works by Topotek 1 and its long-standing collaboration partners. The book Creative Infidelities: On the Landscape Architecture of Topotek 1 edited by Barbara Steiner presents the approaches and methods of Topotek 1 in detail featuring ten important works from the office. Collaborators from the fields of architecture, art and design, private and public clients specialist planners and project managers in addition all consider the joint projects from different perspectives. 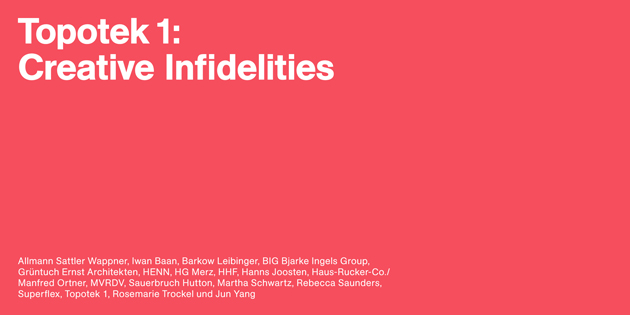 The Architekturgalerie München shows selected works of Topotek 1 and its long-standing collaboration partners.

The focus of the presentation at The Parallax Hanok (Art Sonje Center) is on processes of appropriation and translation. These have a special significance against the background of various ideals and quality concepts related to the idea of the original and the copy.

A presentation on the occasion of the book release Creative Infidelities: On the Landscape Architecture of Topotek 1with Martin Rein-Cano (Topotek1), Barbara Steiner (editor) and Jun Yang (artist, The Parallax Hanok)